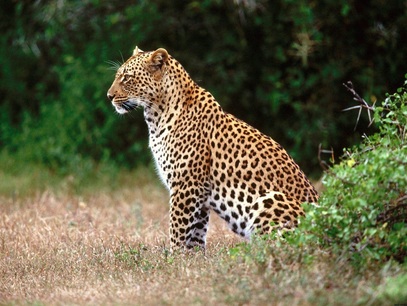 The Leopard (Panthera Pardus) is a member of the Felidae family and is the smallest of the four ‘big cats’ or the genus Panthera, the other three being the Tiger, Lion and Jaguar.  Once distributed across Southern Asia and Africa, from Korea to South Africa, the leopard’s range of distribution has decreased radically due to hunting and loss of habitat, and the greatest concentration of leopards now occurs chiefly in sub-Saharan Africa, there are also populations in Pakistan,
India, Indo China, Malaysia and China. Due to loss of range and declines in population it is graded as ‘near threatened’ species. The Leopard’s numbers are greater than other Panthera species all of which face more acute conservation concerns.
The leopard has relatively short legs and long body with a large skull; it is similar in appearance to the jaguar although it is of smaller and slighter build. The Leopards fur is marked with similar rosettes to those of the jaguar, though the leopard’s rosettes are smaller and more densely packed. The Leopards rosettes do not usually have central spots as the Jaguars do. Buckinghamshire? 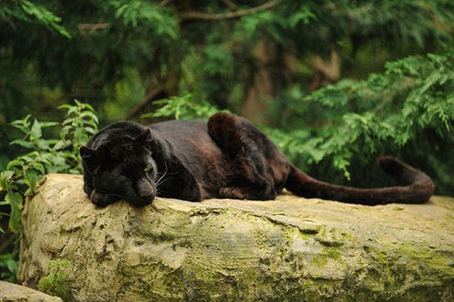 In Britain the Leopard apparently went extinct twelve thousand years ago so is arguably a native animal. Sightings in Britain indicate the black in colour South East Asian subspecies which is generally smaller than the other subspecies of leopard.  Arguments have been put forward that maybe the British Leopard never went extinct,  a black small subspecies which could explain our historic sightings of demonic black dogs and present sightings of black panthers. In the Chilterns and Buckinghamshire however large spotted cats are seen. These big cats resembling typical leopards could indicate micro evolution or natural selection as the orange beech leaves covering the Chiltern forests would be an ideal background for a typical spotted leopard to blend into. 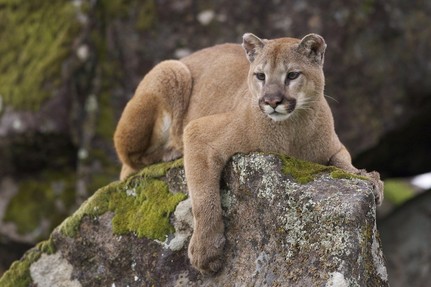 The Puma (Pumaconcolour) also known as Cougar, Mountain Lion, Mountain Cat, Catamount orpanther depending on the region, is a mammal of the felidae family native to the Americas. This large solitary cat has the greatest range of any large wild terrestrial mammal in the Western Hemisphere extending from Yukon in Canada tothe Southern Andes of South America. An adaptable generalist species, the cougar is found in every major American Habitat type, it is the second heaviest cat in the American continents after the Jaguar and the fourth heaviest in the world after the Tiger, Jaguar and Lion. Although large the Puma is more closely related to the smaller felines. A deadly stalk and ambush predator it stalks a wide variety of prey. Primary food sources include ungulates such as deer, elk, bighorn sheep, as well as domestic cattle, horses and sheep. Pumas are very adaptable and can also survive by feeding on small creatures such as rodents, squirrels, rabbits and even insects. The Puma can live in almost any habitat from freezing deserts to the suburbs of large cities. Buckinghamshire?


There have been very specific reports of puma all over Britain with one being trapped in a cage in Scotland in the 1980’s. There are many very good sightings from the Chiltern Hills historically and presently. In 2013 so
far pumas have been seen in residential gardens near the Rye in High Wycombe and along the old railway track in Princes Risborough. There have also been confirmed Puma tracks casted in the bunkers of Wycombe Heights Golf Course. 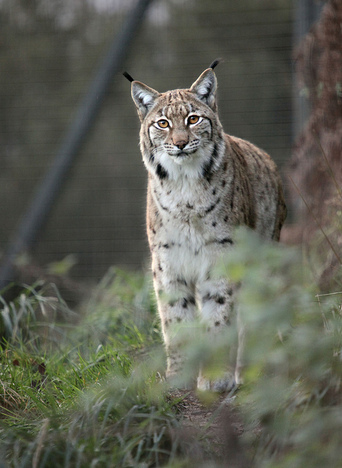 The Eurasian Lynx (Lynxlynx) is a medium sized cat native to European and Siberian forests where it is one of the top predators.
While its conservation status has been classified as ‘least concern’, populations of Eurasian Lynx have been reduced or extirpated from Western Europe where it is now being reintroduced. Considering this official stance however it is interesting to note that in Britain the extinction date continuously becomes more recent as new earlier remains are dated. The official Lynx extinction date used to stand at six thousand years ago this has now been reduced to three thousand with sightings through the last century and still persist to this day.

The Eurasian Lynx is the largest of the lynx’s ranging in length from 81cm to 129cm (32-51inches) and standing about 70cm (28inches) at the shoulder. Males usually weigh from 18kg to 30kg (40 to 66 pounds), females 18kg (40 pounds) on average; it has grey to reddish fur with black spots. The pattern of the fur is variable. Heavily spotted fur individuals can exist in the same area as Lynxes with plain fur. The Eurasian Lynx is mainly nocturnal and lives solitary as an adult. Normally the vocalisations of the cat are very quiet and seldom heard; the presence of the species in an area may go unnoticed for years. The latest sighting of a lynx in Buckinghamshire was early 2015 in Denham.